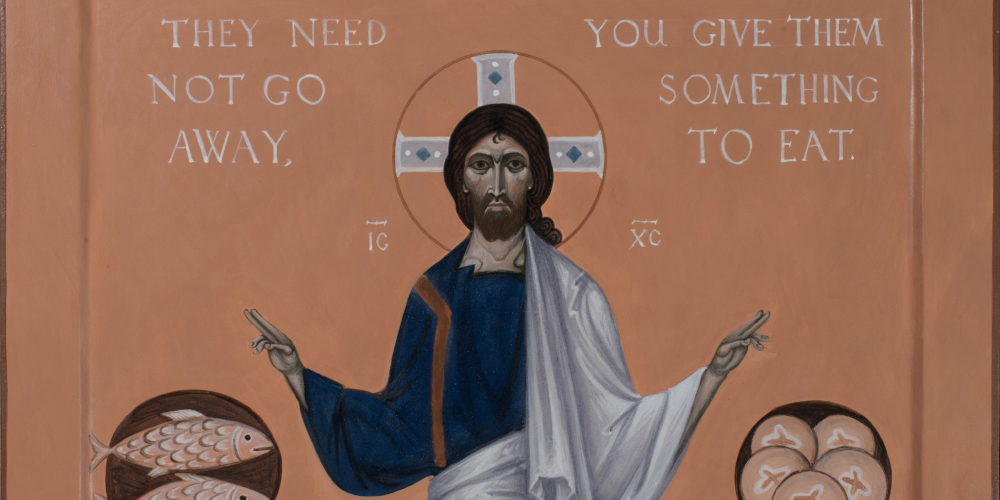 To begin with we can state that the reported feeding of the 5,000 is described in all four gospels. This indicates that it was a very important miracle, as all the evangelists record it. We would like to offer the following explanations and interpretations about the miracle: 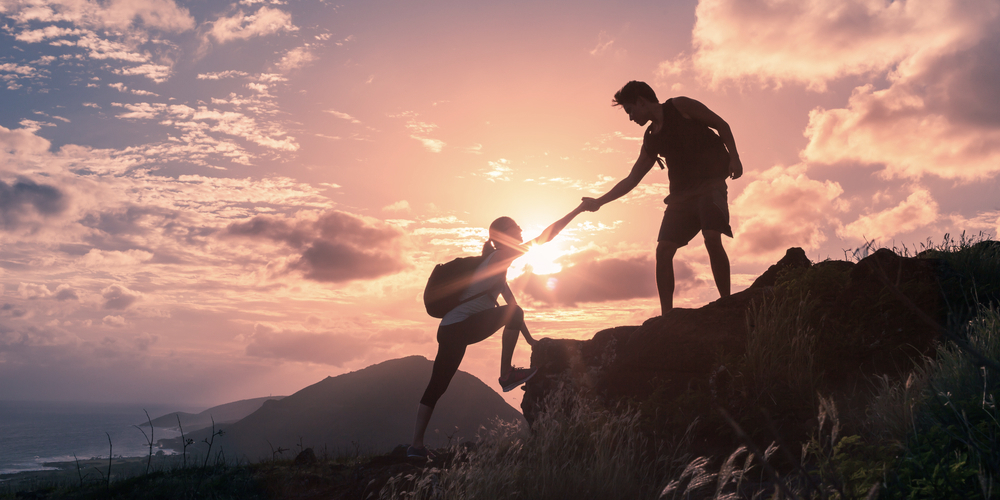 The Gospel tells us that Jesus was looking for a lonely and secluded place (Mt 14:13; Mk 6:31; Lk 9:10) where He wanted to spend time with His disciples. This desire could arise from different motivations. In John’s Gospel we find evidence that shortly beforehand, Jesus had heard of John the Baptist’s death. The Bible also reports in this context that the 12 disciples who had been sent out had recently returned to Jesus (Mt 10,5; Mk 6,7; Lk 9,1-6). One of these disciples might have brought this message to Jesus together with a disciple of John (Mt 14,12). It can be assumed that Jesus was in mourning because of this event. Whether Jesus was in mourning or just wanted to spend some time with his friends, He nevertheless recognized the need of the crowd (Mt 15:14; Mk 6:34). Selfless as He was, although He obviously had other plans for this day, He took care of the waiting people. He first preached to the people about the kingdom of God and when He realized that people were hungry, He performed the miracle of multiplying bread and fish. Only after Jesus had satisfied everyone’s hunger did He retreat alone to a mountain to pray (Mk 6:46).

This may mean for us that even when we have our own plans, if we realize that we are needed we should put our own plans aside for a moment and help first. For example, we might be on the way to a birthday celebration when someone turns up who needs our help. This could be our own parents or children, our neighbours or even a stranger. Then shouldn’t we immediately take whatever time is necessary to listen to them and assist as well as we can, just as we would wish to be helped if we were in the same situation? This is what Jesus did. He had compassion on people and helped them. After that we can still go and do our own thing and have a party after we have helped. This is what Jesus shows us by example through his actions.

After Jesus had multiplied the bread and the fish, He passed it on to his disciples. They distributed the food to the people who had sat down in groups in the grass (Mk 6,39-40). The apostles carried the fish and bread to the individual groups (Mark 6:41). Within these groups it was the responsibility of the group itself to distribute the food fairly. Jesus did not give the bread and the fish to each individual listener personally, but left it to the people themselves to distribute them fairly. The situation is similar with our planet. God made creation for the good of all of us. Creation is full of wealth. There is enough food and sufficient sustenance for all people. But it is the task of society as such to distribute these riches, which we have received from God free of charge, fairly and equitably, and to show consideration for the weakest. The apostles who distributed the bread and fish did so in the Lord’s spirit and did not build up a supply of bread and fish for themselves.  Humanity must see itself as a community, a community that has been sufficiently supplied by God through His creation. This story shows that today’s society has a duty to ensure that there is a fairer distribution of resources.

Jesus, like God, took care of the people in the community. The following circumstance is characteristic.

There was a little boy who had five loaves of bread and two fish in his basket (John 6:9). This means that this boy was fed abundantly and even excessively by his parents or grandparents, as he certainly was not able to eat so much fish and bread alone. This is important for us as the boy’s contribution was the basis for the increase in the bread and fish. We learn from this that if wealth exists in abundance, it can be a blessing for the community provided this wealth is brought into the community. Jesus increased a gift from someone who, objectively speaking, had more than enough food for himself. Since we ourselves are not able to multiply bread and fish, we should follow this example of solidarity.  The boy certainly did not go hungry as a result of his generosity. When he returned home, there was no doubt enough food available. This is how it is for people today. Those who show solidarity will not suffer poverty. It is a systemic error that certain people have billions of dollars at their disposal and others can’t afford to pay for their daily bread. People who have been blessed by a gift or talent or by receiving a legacy should act in solidarity with the weakest and pass on the bread they have received, thus following in the footsteps of the apostles or the boy mentioned above. Let’s also remember the Parable of the ten minas (Mt 25:14-25; Lk 19:11-28)

After everyone had eaten their fill, there was still plenty of fish and bread left over. These left-overs were collected in 12 baskets (Mt 14,20; Mk 6,43; Lk 9,17; John 6,13). This means that there was an abundance of food and no waste. What was left was saved for later consumption. There was no garbage and no littering. The ground was clean again after the event. We can imagine the situation as follows: After feeding the 5,000, which was a crowd comparable to a big concert or a folk festival, the floor was clean and tidy.  This is also important for us. We should change our behaviour. On the one hand, we should not throw things down thoughtlessly on the floor. On the other hand, we should be careful with resources and food. There should be no waste. We can learn from this miracle to leave places tidy and be careful with the resources that God has entrusted to us. 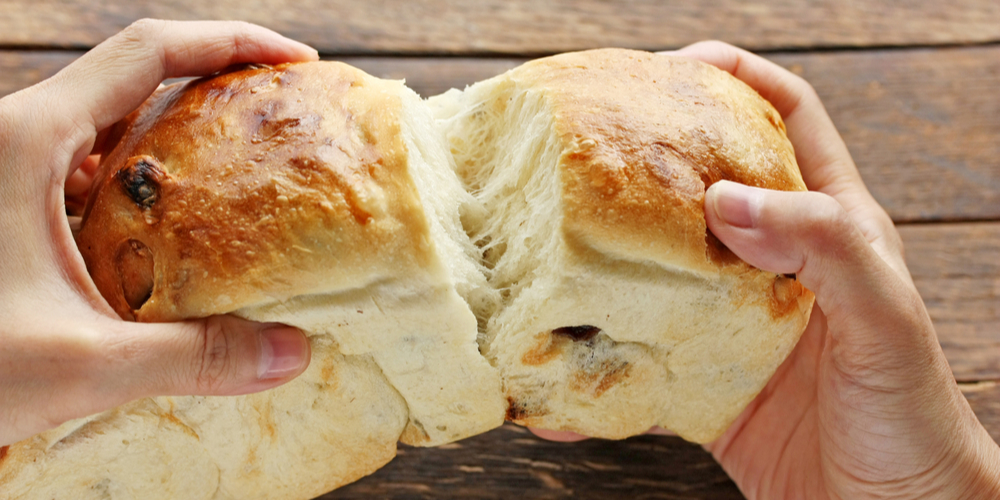 After the 5,000 had been fed, people were preoccupied with their impressions. The next day people came from Tiberias and visited Jesus again (John 6:22). They wanted to have more of the bread that had filled them. In this context Jesus explained to them that it was not bread that had satisfied them. Jesus tried to explain to them that He was the bread of life (John 6:26-36) that had satisfied people.

What does this mean for us?

From the biblical context it can be seen that when Jesus saw the great crowd the day before, He did not first think of feeding the people, but preached the Word of God to them as He had always done. He spread the good news among the people. By preaching the gospel, He filled people with spiritual nourishment. The Word of God filled people. Jesus said of Himself, “I am the bread of life” (John 6:36). As we can see from the prologue of the Gospel of John, Jesus is the Word of God (John 1:1). This word satisfied people’s hunger. In addition to the Word, there was also fellowship. People ate together, listened to the words of Jesus and felt connected. The Word and fellowship filled the people. The people of Tiberias sought this inner satisfaction again. It was not the bread. There was certainly enough bread in Tiberias. But when they learned the truth through Jesus, sadly they rejected it. They thought that salvation and satisfaction must lie in earthly material things and special food, not in spiritual fellowship with our Lord. Even today many people believe that wealth and power will make them happy and fulfilled. But this is a fatal fallacy: people can only be joyfully carefree in fellowship with God.

Could this not also be a sign to us that we should go back to simplicity in our diet? We can hardly imagine ourselves overeating on bread and fish. You can’t become overweight from this meal. It doesn’t cause high cholesterol or high blood pressure, either. This miracle took place near Bethsaida, on the lake of Galilea. Both of the boy’s fish were certainly from the lake.

The feeding of the 5,00 took place using basic local food. This could also be a model for our diet.